What is the energy mix?

Over the last few years, a certain expression has become part of the vocabulary linked to the energy transition and has even become part of our everyday language: the energy mix.  What does it mean? What scope does this notion cover? And what are the specificities of the French energy mix? A few answers…

To heat buildings, run factories, fill car tanks, light roads, in short, to meet its energy needs, a country uses different types of energy, called primary and secondary energy. Primary energies can themselves be used to produce new forms of energy, such as heat, which are then called “secondary”. Its current definition includes both fossil fuels (oil, coal, natural gas in all its forms) and uranium as well as renewable energies such as wind, solar, geothermal, hydro, or biomass. The term energy mix refers to all the primary energies consumed by a country to meet its needs. It is important to distinguish the energy mix from the more specialized electricity mix, which includes only the energy consumed to produce electricity and nothing else. The energy mix, on the other hand, covers all of a country’s energy consumption, including transport and heating, for example.

The energy identity card of a country

The energy mix is a bit like a country’s energy identity card. At a glance, it can tell us about its history, geography, investments, availability of natural resources, and geopolitical constraints. In France, for example, the importance of nuclear power is the result of a vast program launched in the late 1970s to preserve the country’s energy independence, which had been shaken by the various oil crises. Germany, however, is much more reluctant to use nuclear power, having decided a few years ago to close its nuclear power plants and to compensate with coal, until renewable energies are sufficiently developed to take over.

In any case, the energy mix evolves from year to year. Its composition depends on the price of raw materials, the state of infrastructure, global warming commitments, and geopolitical uncertainties. In France, the contribution of renewable energies is estimated to reach 30% of the energy mix by 2030 to meet the objectives of the law on energy transition for green growth. On the other hand, in the short term, the share of nuclear power is expected to decrease due to the technical unavailability of part of the plants. In accordance with the objectives of the various COPs (Conference of the Parties of the UNFCCC), most countries across the globe are working to reduce the share of carbon-based energy in their national mix. 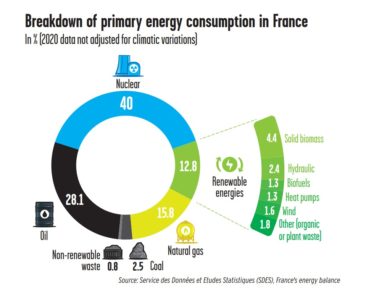 What is the energy mix?